Well, it looks like Pete's Mom forgot to pack the orange slices this week. I was a little worried about this team. They spanked Lion's 8-2 last week, who have been a good competitor over the years. I think we Tie them every time except for once when we beat them 4-1. Pete's was at a full 11 at the whistle and soon went to 10 when a player went down with injury. We had a full squad of hungry hippos for goals. We passed well and we seemed to gel once we settled in. We wore out the other team by the end of the first half. It was 1-1 tie though and we had to climb back. We had the olde "talk" at half time and made adjustments and ran them even more. We started to finish. Eric had 2 goals and an assist. Production. We had Kevin Carter back on the squad and he added some spark. His altercation with one of their players should have resulted in a yellow for the other guy after Kevin was shoved right in front of the ref. Jay in goal did not get much workout, and after securing a win for our Mamma Zu Tu brethren the game before, he was happy to have a walk in the park. The slant on the field Dorey Park #6 seemed more extreem (7 degree grade?) and the sidelines were very narrow, but did not make a difference to us. We passed well and finished well and had an enjoyable romp on the pitch.
I got a chance to possibly socre and the whole team was looking for some forward to pass me the ball in front of the net, as I streamed down the field in gazelle fashion. I also just wanted to prove i could still run.
Good job defense, we shut down some talented but one demensional players. I also want to give props to the mids for support of the D and moving the ball and getting fine assists to the forwards. Guys at the top, you did what you do best, put it in the back of the net.
I will attribute the final goal to the deserving player if someone can update the old man to the rightful owner.

Next up, our nemisis Glanville in 9 days on an 8:30 tuesday night. Strange things happen at night. Let's let it be strange for the opposition this time
Posted by Michael Delano at 9:01 PM 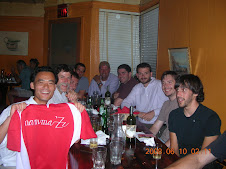 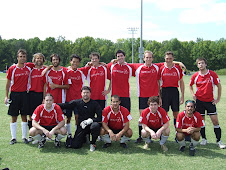